How to Photograph Lightning

A spectacular electrical storm is fascinating to witness. The sudden bolts of light, the crash of thunder and the sheer spectacle of the phenomenon draws us in. It reminds us of nature's unmatched power and beauty. For the photographers out there, capturing the classic 'lightning strike' photo is always exciting - partly because, no matter how experienced you are, there is always an element of luck in the shot.

Many people think that to photograph lightning you have to stand with your finger at the ready and be fast enough to click the shutter button when you see a strike. Thankfully that's not actually how good lightning photos are taken. While this technique may work very occasionally (if you're incredibly lucky and have impossibly fast reflexes) there is a much easier way to capture yourself a classic lightning shot!


A quick note about safety:

Part of our fascination with storm cells is their unbridled power. While this is great to photograph, it must also be respected - so please take care when photographing lightning. Once you're all set up and your camera is taking photos, take shelter either in a vehicle or building (hence the help of a cable release or remote trigger if you've got one, see below). It's not wise to stand next to a metal tripod in the middle of an open field, under a tree or in a body of water while lightning is about. Once the approaching storm cell gets close, it's best to pack up and head inside. While lightning strikes are rare, they do happen.

Like most photography, it certainly helps to be prepared when photographing lightning. If the storm is already upon you, by the time you think about heading out to photograph it, you'll very likely get pelted with rain (or even hail) and miss many of the best shots. The best time to photograph a storm is while it approaches i.e. before the rain hits and makes photography nearly impossible. Keep an eye on the weather reports and use an app like 'Willy Weather' to see which direction the storm cell is heading; then think about a position or vantage point that might make for interesting photographs. Buildings (such as cities) or landforms such as beaches and headlands often make for interesting lightning scenes.

Like most landscape photography, you'll want to use a wide lens to fit lots of the scene in the frame. Obviously it's impossible to know exactly where the lightning will appear in the sky, so a wide lens will allow more of the sky in the photo and increase your chances of capturing a decent strike. 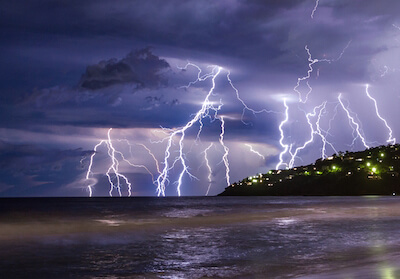 4) Compose a good shot (regardless of lightning).


Good composition goes a long way in turning a great subject into a great photo! When it comes to lightning, many people overlook the framing of a photo and simply try and capture a shot of the lightning itself. While the lightning will (hopefully) form a key part of the scene, lightning photos tend to look better if the lightning strike is thought of as an 'added extra' in the photo when composing the shot. Obviously you'll want to point the camera towards the storm, but in terms of composition, try to frame up a scene that would be a good photo even if the lightning weren't in the shot. That way, when the lightning does strike, it will totally enhance an already great image! Consider including some foreground in your shot and think about the rule of thirds. It's also worth taking the time to double check your horizon is straight. The essentials of composition are often forgotten about in the excitement of a lightning storm. Taking the time to consider them will really help make for a great result.


In terms of focus, you don't want to actually focus on the lightning itself (impossible to do anyway). Instead, focus on a key feature in your scene such as a building or headland near the storm. To ensure your camera doesn't keep hunting for a focus every time you want to take a photo, simply get the camera to find the focus once, by half pressing your shutter button. Once your camera has got focus (in low light, if your camera is struggling to find focus, try briefly pointing directly at a well-lit building near the storm, or the ridge of a hill with a bit of contrast), then remove your finger from the shutter button and switch from Auto Focus to Manual Focus (most likely on the side of your lens). Assuming you don't move from your position, this focus will now be locked-in for every photo, and the camera won't need to hunt for it each time. If it's pitch-dark and you can't get your camera to Auto Focus at all, then switch to Manual Focus and set the focus distance on your lens to 'infinity'. 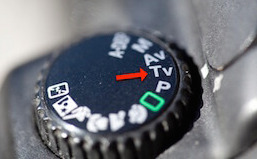 6) Settings: Select a SLOW shutter speed and a LOW ISO.


The trick to taking great lightning shots is to use a long shutter speed. This maximizes the chances of a lightning strike while the shutter is open! Since most lightning storms occur in the evening, the low lighting conditions make it possible to open up your shutter speed quite long, sometimes to 30" (30 seconds - usually the maximum a camera can do anyway). Any lightning strikes that occur during that 30-second photo will be recorded by the sensor and appear in the resulting photo! Easy! You might even capture several in the one photo!

To select a long shutter speed, turn your mode dial to Tv (or S) mode. Start by selecting a low ISO (something like ISO 100) and then simply scroll your shutter speed all the way to somewhere between 15 and 30 seconds (will look like 30"). You won't need to worry too much about your aperture (f/number) as the camera will automatically calculate this for you. Just double check, though, that your f/number isn't blinking/flashing at you. If it is, this is your camera warning you that your shutter speed is too long to result in a correctly exposed photo for the current ambient light. If it is blinking, then speed-up your shutter speed a bit until it settles down. Assuming your f/number isn't blinking at you, you're just about set to start taking photos!

It's always a good idea to take a test shot or two, just to check your photos are coming out the way you hoped. If, later, the eventual lightning strikes cause your photo to be too bright, then you may need to ask for a slightly darker photo for the next shot. This is easily done by using your 'Exposure compensation'. Simply dial your +/- brightness 'exposure compensation' down to minus 1 or minus 2 and the next photo your camera takes will be darker. 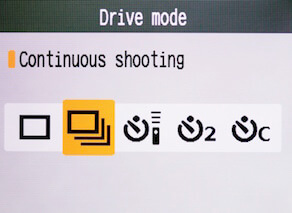 If you don't have a cable release, you can do a similar trick by holding down the shutter button with a stick or a pen laying across it, and then keep it held in place with a rubber band or two (also a handy trick for doing star trails). Of course, if you'd prefer, you can always just stand next to the camera and keep pressing the shutter button yourself after each photo. 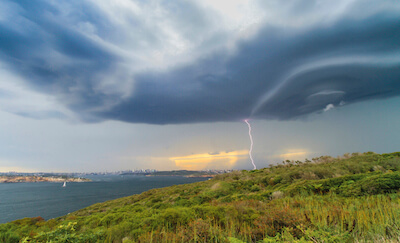 What about afternoon thunderstorms?


Capturing lightning is more difficult during the daytime, as you won't be able to take very long photos - decreasing your chances of capturing a strike in your photo. However, the principles remain the same. Set up your tripod, lock your focus, select a low ISO and try and get the longest photo you can before the aperture flashes at you! Using an ND (Neutral Density) filter (or even a Polarising filter will help a little) will help allow you to take longer photos despite the bright conditions.

Little tip: Rather than shooting in Tv (or S) mode for this, an easier way to get the longest photo possible is to jump across into Aperture priority (Av or A mode) on your mode dial. By selecting the biggest f/number you have (eg f/22, which is the smallest aperture hole in the lens) with a low ISO (eg ISO 100), your camera will automatically select the longest shutter speed possible for the lighting conditions. By shooting on continuous shooting drive mode, you can then take dozens of photos, one after the other, just by holding down your shutter button - and hopefully the lightning will strike in one of them! You'll have more culling to do afterwards as most photos won't have a lightning bolt in them, but if you're lucky, you'll get the shot you're after. 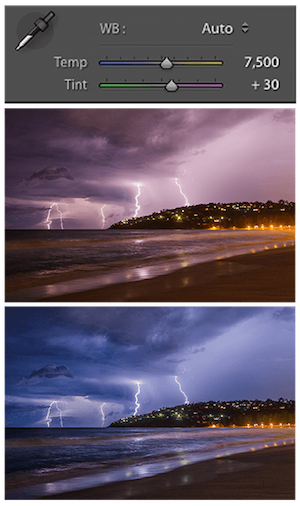 
How you tweak your photos in post-production is a matter of personal preference, however when shooting lightning, there are some common tweaks that you might want to be aware of.

Should I shoot in RAW?


Shooting in RAW isn't essential, but if you're proficient in post production, it does give you more ability and depth of control when tweaking, particularly noticeable in shadows and highlights. Just be aware that if you choose to shoot in RAW, you will NEED to process the file and export it as an image (jpg or similar) if you wish to print it, share it on Facebook or email it to a friend. Check out our tutorial on RAW vs JPG to find out if shooting in RAW is right for you!


White balance (a mix of the 'temperature' and 'tint') determines how colours appear in your photo. Lightning can sometimes cause white balance to behave a little erratically. This is because lightning is a random (and very bright) bolt of light of a unique colour, which your camera wasn't expecting when it made its colour calculations. The resulting photo can often look too pink or purple. This is easily corrected by adjusting your white balance (temperature and tint) in post processing. Just slide these around until you achieve the result you're after. As a general rule of thumb, 'cooler' (bluer) lightning shots (less warm tones such as yellow and orange) often look more eye-catching. Selecting 'Tungsten' on your white balance in your camera can help to give colder-coloured photos.


It's also worth adjusting your contrast and highlights to help the definition of the bolt stand out against the dark sky. Don't go overboard, but a little boost in contrast and a little drop in the highlights can often make for a better photo.


Have you seen those photos with several lightning strikes in the one image? It's very unlikely all these strikes were captured in one, 30-second exposure. Instead, those photos are usually several (nearly) identical shots, stacked on top of each other.

If you keep your tripod in the same position and take several photos, you will capture several identical shots where nothing in your scene changes except for the lightning. By stacking these (nearly) identical images on top of each other in post production, each new lightning strike is simply added to the photo. The result is a stacked photo with lots of strikes. We recommend using a program such as 'Star Stax' which does this stacking for you automatically. It's free, and actually designed for stacking photos of stars into a 'star trail' (we have a great tutorial on star trail photography), however it works exactly the same way with lightning (or fireworks - see our how to photograph fireworks tutorial!)

Here's an example of 3 lightning photos, stacked together - they all had the same background scene, just featuring different bolts of lightning.

Hopefully the above steps will help you capture some literally striking images of lighting during the next storm! Have a go and post some of your results on our facebook page!